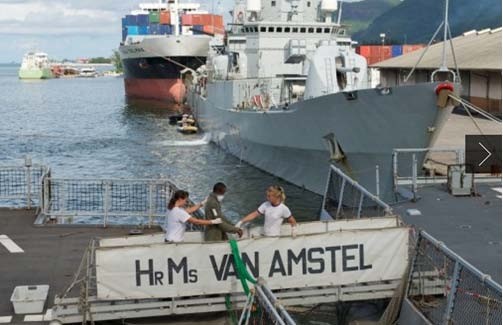 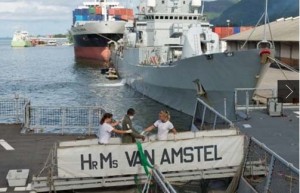 On Wednesday 2 October 2013 eleven pirates were convicted in the Seychelles Supreme Court of committing acts of piracy and operating a pirate vessel between 7 – 11 May 2012. Their sentences ranged from 18 months to 16 years.

The pirates had been apprehended by the Royal Netherlands Navy frigate, HNLMS Van Amstel, on 11May 2012, after the warship’s Lynx helicopter sighted a suspicious fishing dhow towing 2 skiffs, 400 nautical miles off the Somali coast.

When the warship’s boarding team approached the dhow, the Dutch Navy crew found 11 suspected pirates of Somali origin and a total of 17 hostages on board.

After taking the suspected pirates to HNLMS Van Amstel, the Dutch boarding team found significant evidence that linked the 11 men to an armed attack on Motor Tanker ‘Super Lady’ a few days earlier.

The 17 freed hostages, who were Iranian fishermen, were very grateful to the Dutch sailors for rescuing them from the armed pirates. The Royal Netherlands Navy has contributed warships to the EU Naval Force since the EU counter piracy operation began in December 2008. The current EU Naval Force flagship is HNLMS Johan de Witt, with Commodore Peter Lenselink embarked as the Force Commander.