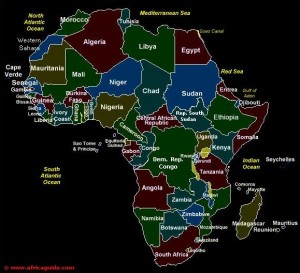 For a Clickable map of Africa http://www.africaguide.com/afmap.htm

In the Gulf of Guinea, in addition to a rise in piracy and armed robbery – 31 incidents so far this year, including four hijackings – IMB reports a surge in kidnappings at sea and a wider range of ship types being targeted. This is a new cause for concern in a region already known for attacks against vessels in the oil industry and theft of gas oil from tankers. “There has been a worrying trend in the kidnapping of crew from vessels well outside the territorial limits of coastal states in the Gulf of Guinea,” said Pottengal Mukundan, Director of IMB, which has monitored world piracy since 1991.

“In April 2013, nine crew members were kidnapped from two container vessels, one of which was 170 nautical miles from the coast. Pirates have used motherships, some of which were smaller off-shore supply vessels hijacked by pirates to conduct the attacks. There continues to be significant under-reporting of attacks – a phenomenon highlighted by the IMB year on year. This prevents meaningful response by the authorities and endangers other vessels sailing into the area unaware of the precise nature of the threat.”

Armed pirates in the Gulf of Guinea took 56 sailors hostage and were responsible for all 30 crew kidnappings reported so far in 2013. One person was reported killed and at least another five injured.  Attacks off Nigeria accounted for 22 of the region’s 31 incidents and 28 of the crew kidnappings. Mr Mukundan applauded the signing of the Code of Conduct Concerning the Repression of Piracy, Armed Robbery Against Ships, and Illicit Maritime Activity in West and Central Africa in June 2013 by the heads of the West and Central African countries.

“This should be translated soon into action on the water,” he said. “If these attacks are left unchecked, they will become more frequent, bolder and more violent. Cooperation and capacity building among the coastal states in this region is the way forward and urgently needed to make these waters safe for seafarers and vessels.”

Somali clampdown Meanwhile, in East Africa’s Gulf of Aden and Somalia, eight piracy incidents including two hijackings were recorded in the first six months of 2013, with 34 seafarers taken hostage.

IMB attributes this significant drop in the frequency and range of attacks by Somali pirates to actions by international navies, as well as preventive measures by merchant vessels, including the deployment of privately contracted armed security personnel. Mr Mukundan said: “The navies continue to play a vital role in ensuring this threat is kept under control. The two vessels hijacked were recovered by naval action before the pirates could take them to Somalia. Only the navies can take such remedial action after a hijack. Denying the pirates any success is essential to a sustained solution to this crime.

Pirates are known to be operating in these waters. Despite the temporary protection provided by the southwest monsoon in some parts of the Arabian Sea, the threat remains and vessels are advised to be vigilant and comply with the industry’s Best Management Practices as they transit this area.”   As of 30 June 2013, Somali pirates were holding 57 crew members for ransom on four vessels. They were also holding 11 kidnapped crew members on land in unknown conditions and locations. Four of these crew have been held since April 2010 and seven since September 2010.

Elsewhere in the world, low level thefts against vessels in ports and anchorages in Indonesia accounted for 48 attacks of which 43 vessels were boarded and some crew injured. IMB’s report includes details of the ports and anchorages where attacks appear to be concentrated.