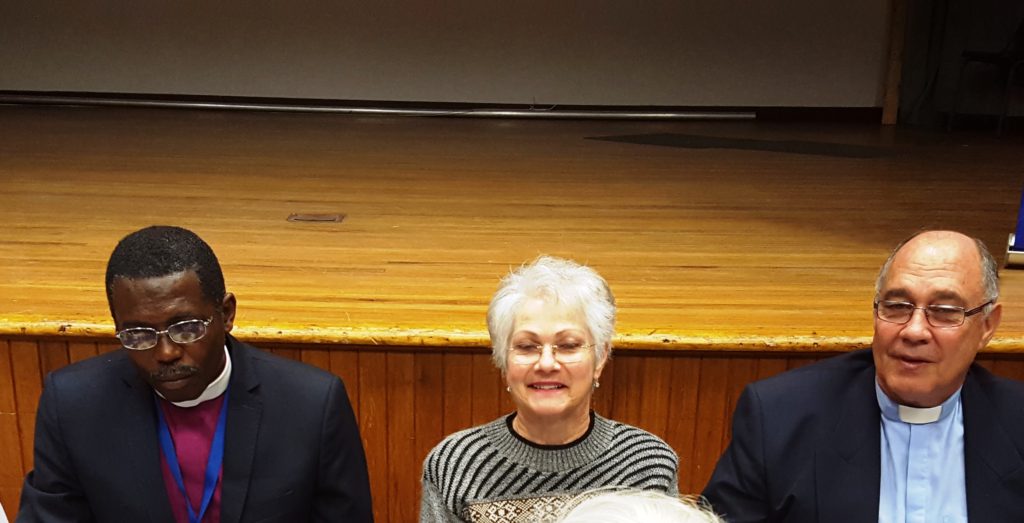 Emeritus status was conferred on Rev Boet van Schalkwyk by the Presbyterian Church on 14 July 2016 during a Valedictory Service in East London which was held in his honour to mark his retirement from the ministry of the UPCSA at the end of July 2016.

His ministry in the Presbyterian Church saw him serving at Middelburg [post academic], East London and Centurion before being called to the International Sailors’ Society where he presently serves as CEO. Today Boet heads up the Sailors’ Society Crisis Response Centre in Durban and holds responsibility for the Sub-Saharan region on both the East Coast and West Coast of Africa.

Rev William Pool, who also serves on the Sailors’ Society SA Board of Directors, paid tribute to Boet at the function also attended by the Moderator of the Presbyterian Church in SA, the Rt. Rev Robert Mutare.

Calling to the Ministry

Whilst still at school in Harare Zimbabwe, Boet received his calling to the Ministry but was advised to first work… A very successful career with the Royal Rhodesian Air Force followed where he became Staff Officer Training [Tech.] and was admitted to the Royal Aeronautical Society, Society of Licensed Aircraft Engineers and Technologists and Rhodesia Institute of Management and held the rank of Wing Commander.

He followed Theological Studies through the University of South Africa and soon after arrival at Headquarters; Boet was given the position as Air Force Chaplain.

One month after his appointment as chaplain, a sabotage attack on a Zimbabwean base occurred resulting in the arrest of 28 men who were dispatched to various holding cells throughout the country for further interrogation. Together with others, Boet counselled and cared for them in prison, and their families at home, over the next 18 months – a remarkable period of ministry.

Boet injured himself by crushing two lumbar vertebrae [compression fracture] in a parachuting accident. The diagnosis was that he would be paralysed and confined to a wheel chair which happily did not occur. Presbyterian Church Ministry sent word from Johannesburg that he was to do a post academic course in South Africa resulting in his resignation from the Air Force after 18.5 years’ service.

He was called to the Cambridge Church in East London where he served as Moderator of the Presbytery and also took on the task of ship visiting as an auxiliary port chaplain for the Sailors’ Society in 1988.   The next calling was to Centurion, near Pretoria, where he returned to university and wrote his thesis.

In 2002 Boet accepted a call to become Principal Chaplain/National Secretary of the Sailors’ Society and his wife, Linda became Secretary. In 2012 the Society appointed Boet as their CEO and he has served the Society for a total of 19.5 years.

“We are proud of him. And so at the end of his ministerial life, we as a church, we salute Boet and Linda. However, has too much energy and health to retire.  So he shall carry on for some years yet” said Rev Pool.