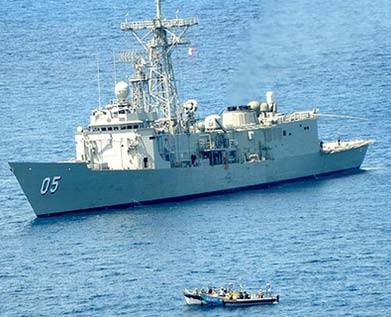 The HMAS Melbourne has scuttled two pirate boats and captured nine suspected Somali pirates as part of a multinational taskforce attack on rogue sea operators. A Seahawk helicopter traced the skiffs and guided the Royal Australian Navy warship to them, 500 nautical miles from the Somali coast, a statement from the Combined Maritime Forces counter-piracy taskforce has said.

Armed navy personnel boarded and searched the skiffs, arresting nine men and later destroying the skiffs and their equipment.

The taskforce hunted down the suspected pirates after they allegedly attacked and exchanged gunfire with the super-tanker Island Splendor on Friday. They are believed to have attacked a Spanish fishing vessel three days later.

“It is clear that there are still pirates out there determined to generate income from taking merchant ships hostage,” said Commander Brian Schlegel, HMAS Melbourne’s commanding officer.  “Mariners have been served a timely reminder of the perils of transiting the Somali coastline,” he said.